Hi and welcome to the Forum. That's quite a challenging question!
I assume because you say "game" you're excluding kiddie racing cars and motorbike rides of the sit-on variety.

I think we can also exclude those steering games in which the "car" is represented by a ball-bearing (see Super Steer-a-Ball).

A distinction also needs to be made between the pure mechanical racing games and the "racing while steering" games that are the true precursors of the modern arcade race simulators.

The mechanical racers usually required two players to crank two handles as fast as they could in order to advance the racing models in competition against each other. These fairly unsophisticated mechanical games date back to the turn of the century and the models were usually horses, sometimes dogs, cycles and later (occasionally) cars.

To complicate matters further, there are also racing games in which the machine runs the races and the players just bet on the outcome. We'll also exclude this type of gambling machine from our survey.

I think it might well be that the first versions of car racing and driving games were British. Innovation in these types of skill and amusement games was strong in the UK during the first few decades of coin-op development. But without further research, a definitive list such as you suggest is impossible. At present our slot machine patent listing is incomplete and many games weren't patented anyway. All we can do for now is list some early and interesting examples.

Algernon Evans's 1928 Patent No GB322268 for a rolling road type driving game is the earliest I've seen. It's certainly a fascinating early effort - complete with scoring dial, natty driver's chair and massive oak cabinet containing a large rolling drum only a small part of which is revealed through a narrow aperture in the front. Although the patent was filed, no sealing fee was paid, which makes one wonder whether it made it to the production stage. 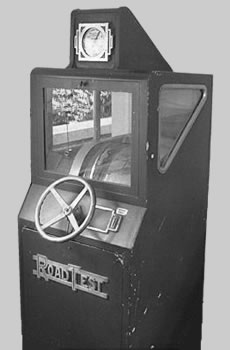 Three years later Mark Myers filed Patent No GB368974 on a very similar idea. Called the Road Test, the player steered a metal toy car (or cars) along a road (or roads) laid over a large rotating metal drum. If the car strayed off the road, a circuit was made which caused a gauge to register the error. Only when completing the course without incident was the coin returned. The steering wheel was the only control; players could not alter their car's speed. It must be the most successful early game of the type.

Myer's claim is for the mechanical and electrical linkage between the steering wheel and the car, not for the rolling road concept which already existed, as he acknowledges in the patent. 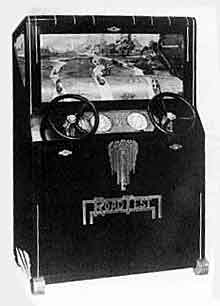 He followed this with Double Road Test, in 1936, which allowed two drivers to compete against each other (the 1931 patent anticipated this version). A very similar game was also made (possibly under licence) by Ruffler & Walker.

Charles Ahrens also made a single player rolling road game called Steer-a-Car. This looks a little earlier and does not employ Myer's electro-mechanical linkage. Ahrens was not known for innovation. He had several legal run ins with other manufacturers for stealing their ideas, so it's possible this imitated an earlier design.

On JG Brenner & Co's Drive-A-Test (early to mid 1930s), a paper roll-fed map served as the rolling road, a section of it being dispensed as a record of the driver's skill.

The Germans also appear to have been active in the late 1920s or early 1930s, designing a number of "table top" style steering and racing games. 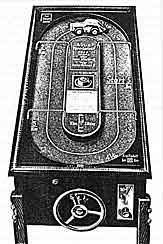 The Americans started to make versions in the 1940s. Notably the International Mutoscope Company's Drive-a-Mobile (1940) which added a light-up indication of the player's position on a map above the rolling road. The following year, the same company produced a two player version called Cross Country Race. 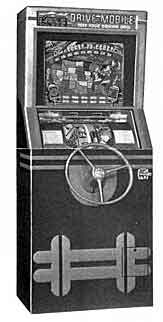 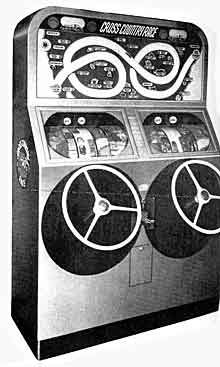 Their Drive Mobile of 1954 included a driver's seat. 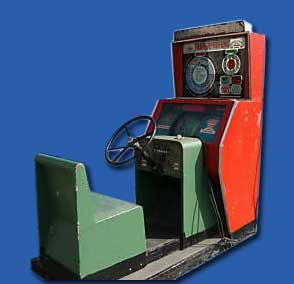 Their weirdest "rolling-road" steering test was the space-age Flying Saucers.

Although these early electro-mechanical games sometimes combined driving and racing, for the racing games proper (with accelerator pedals etc.) we have to return to America and the arrival in the 1950s of Capital Projector's Auto Test which replaced the rolling drum with a rear projected street scene which advanced behind the model car.

This became the format for the next couple of decades. Gear levers, brakes, driver seats and realistic sound effects were added and the steered vehicle could be anything from a car, motorcycle, jet, rocket or submarine. 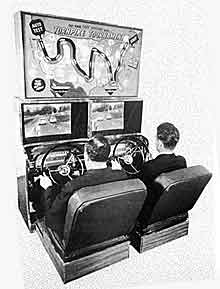 These rear projection games usually incorporated a timer and more emphasis was placed on speed, although dodging obstacles remained important, of course. Chicago Coin were the biggest manufacturer from the late 1960s into the '70s. 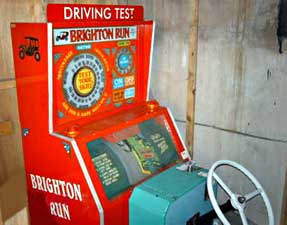 Britain's M1 motorway opened on on April 11th, 1960. Before you risked a run on it, you could test your skill on the M1 Road Test, a revamp of the Mutoscope Drive Mobile (This example still operates in Mablethorpe). A variant of this machine was Brighton Run. 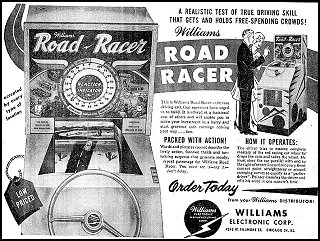 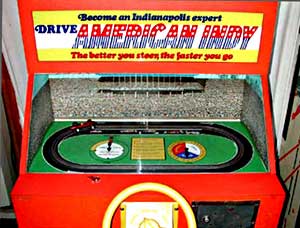 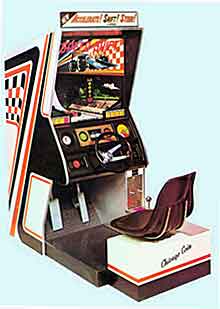 Motorcycle simulators were very rare until the arrival of video technology.

Bill Kurtz's Arcade Treasures and Slot Machines and Coin-Op Games are the best sources of information about games from the 1940s onwards. 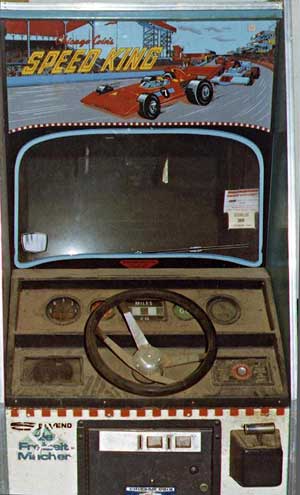 Fantastic reply and thanks for the effort....

Yes, I am finding it hard for the new website to explain exactly what the driving/racing genre is. My ever growing database is endeavoring to cover all games from the earliest electro mechanical to the newest Xbox 360 and PS3 titles. This week it the database hit the 7000 item mark......

So I am covering arcade, console. handheld, game and watch, PC and even some very clever battery operated "Board" games from the 50s and 60s.

As long as some mechanized vehicle plays a major part in the game/simulation then it will be included.

I have chosen Dime-A-Drive as the name for the site because that early coin-op summarizes the whole genre for me. It is not a game nor a serious simulation. People paid a dime for the simple pleasure of driving an electric powered replica of a car and reveling in the technology that let them do so.

That 1928 patent was the reason I thought I would give this forum a chance to answer the questions. Rolling Road technology seems like a certain precursor to the drum type games you have shown in your answer.

I have been hunting down those two books for quite a while in Australia. Then I found my local library had a copy of the Kurtz book with a broken binding that they dumped less than a month ago!!!

Once again, thanks for the excellent reply.
Top

What is the address of your web site? I'd like to pay a visit!
Top

Yes, your site sounds great. Is it online yet?

The two Kurtz books, by the way, can be bought online from the Library.
Top

The site will be up "soon".

I started creating it using a commercial CMS and found, to my horror, that everytime the vendors web server died so did my site due to "call home" security features.

So I was paying for a premium hosting site and getting shafted by the dodgy copy protection scheme.

So I spat the dummy and have had to convert it to another CMS.
Top

For those who were watching, there was a nicely restored Myers Road Test Machine on the Antiques' Road Show tonight. I am sure it will be available on iPlayer for those who missed the program.
Top

There was a Myers Road Test on the Antique Roadshow tonight; they valued it at £2000.
Top

Thanks for pointing that out, as I'd missed it. Just watched it now on BBC iplayer. It's available on iplayer until 8.09 p.m. on 9 Jan 2011. I see it's the double Myers Road Race; big beast! It starts at 25.28 in case people don't want to watch the whole thing.
Top

ooo thanks! i'll be putting that on when i get home! can't get away with it now as i am rather naughtily using school time to be on here (i'm pretending its research, which i suppose it kind of is) x
Top
Post Reply
13 posts

Return to “Questions and Answers”