From pinball to peep shows: Black and white photographs reveal how Londoners of all ages enjoyed themselves in amusement arcades during the 1950s, Daily Mail, 18 February 2019 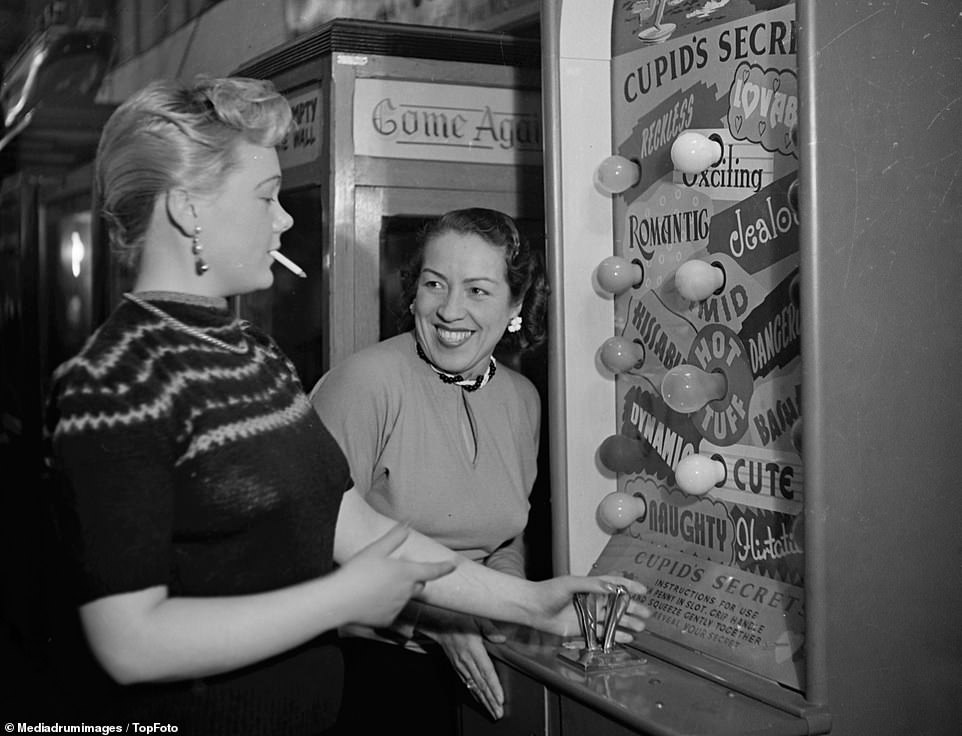 Two women smile as they play the 'Cupid's Secret' slot machine at an amusement arcade in London in December 1951. People using the machine had to insert a penny before gripping the handle and squeezing it gently together to 'reveal your secret' 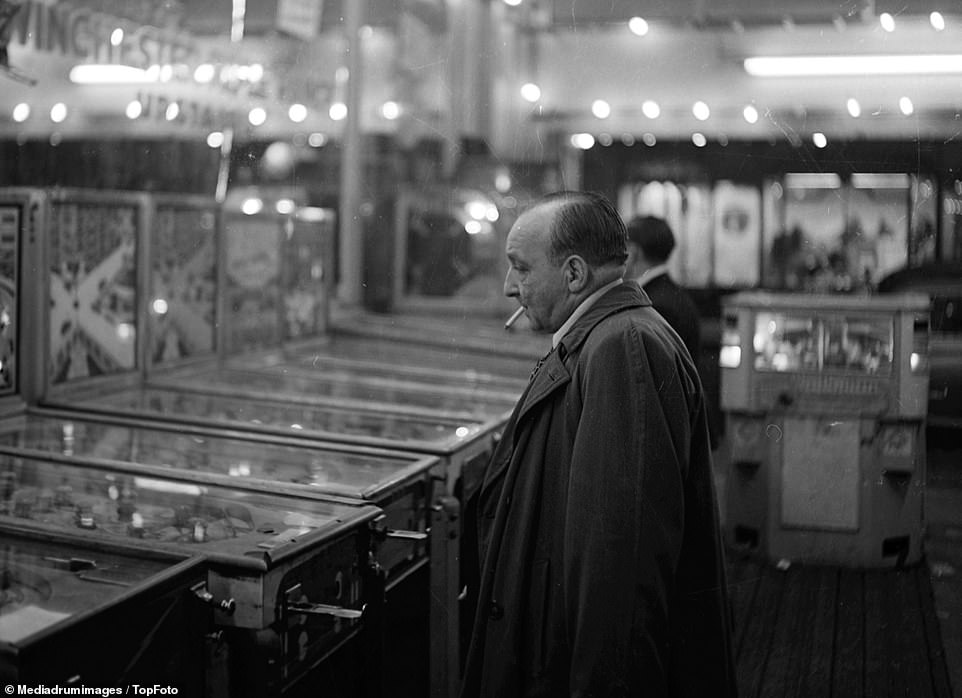 The arcades were often frequented by people playing pinball, with a line of machines seen here at one in London in 1951. The machines can still be found at arcades today, but they were a much bigger draw before video games arrived in the 1970s 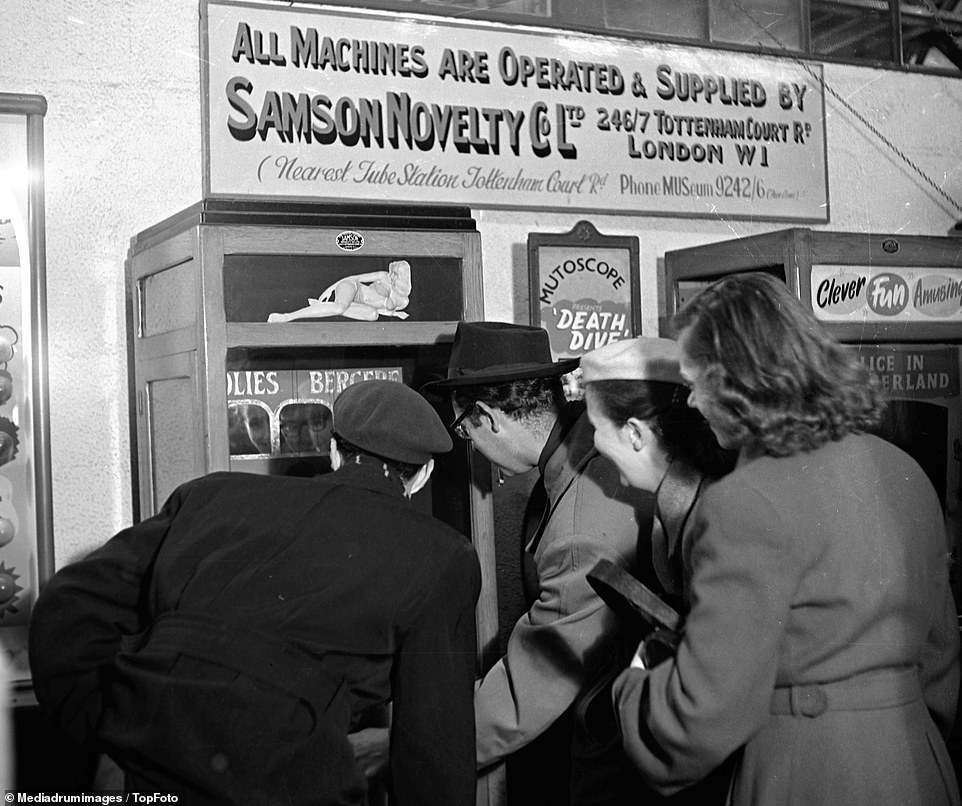 A group of men and women enjoy the 'Folies Bergere' peep show machine, named after the cabaret hall in Paris of the same name. The machines might look out of place today, but were a common sight in arcades in the 1950s, predating adult cinemas 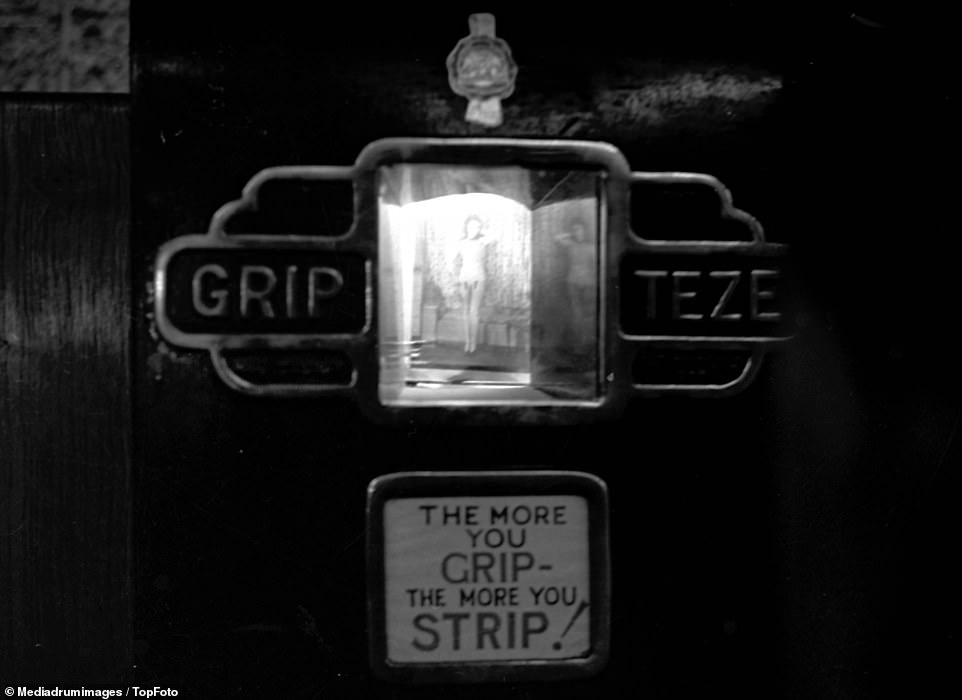 The saucy 'Grip-Teze' was a slot machine which saw players try to make a woman's clothes vanish by testing their strength on two hand grips. Ratings range from 'well-covered' to 'Oh, boy' - with players told: 'The more you grip, the more you strip' 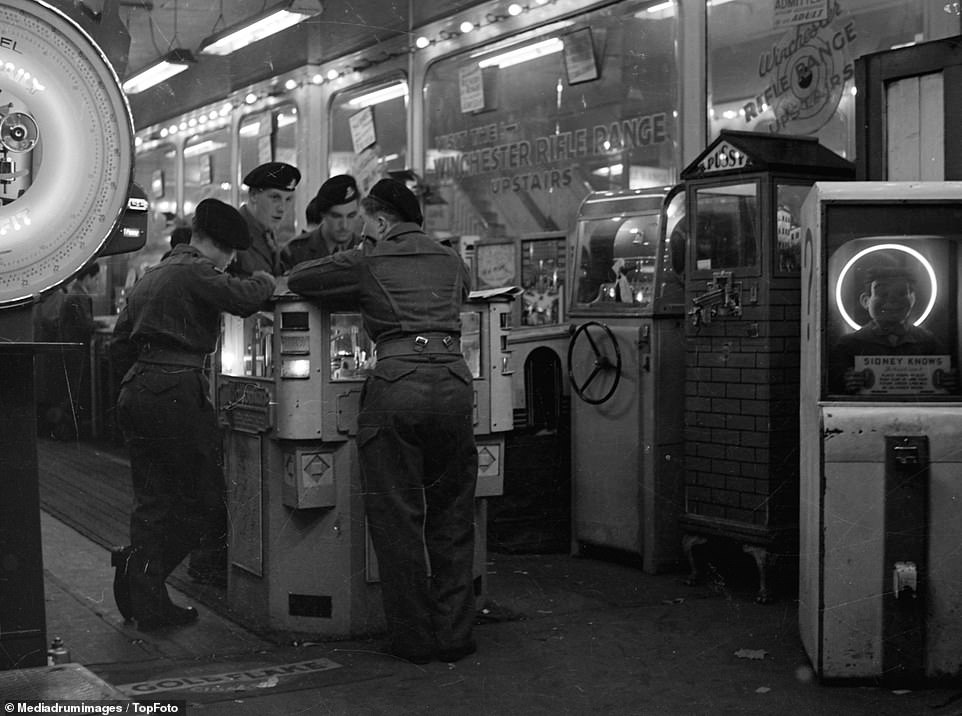 A group of off-duty soldiers gather around the slot machines in the amusement arcade. A mat promoting the classic Indian cigarettes brand Gold Flake can be seen on the floor, and adverts for the upstairs 'Winchester Rifle Range' are on the glass 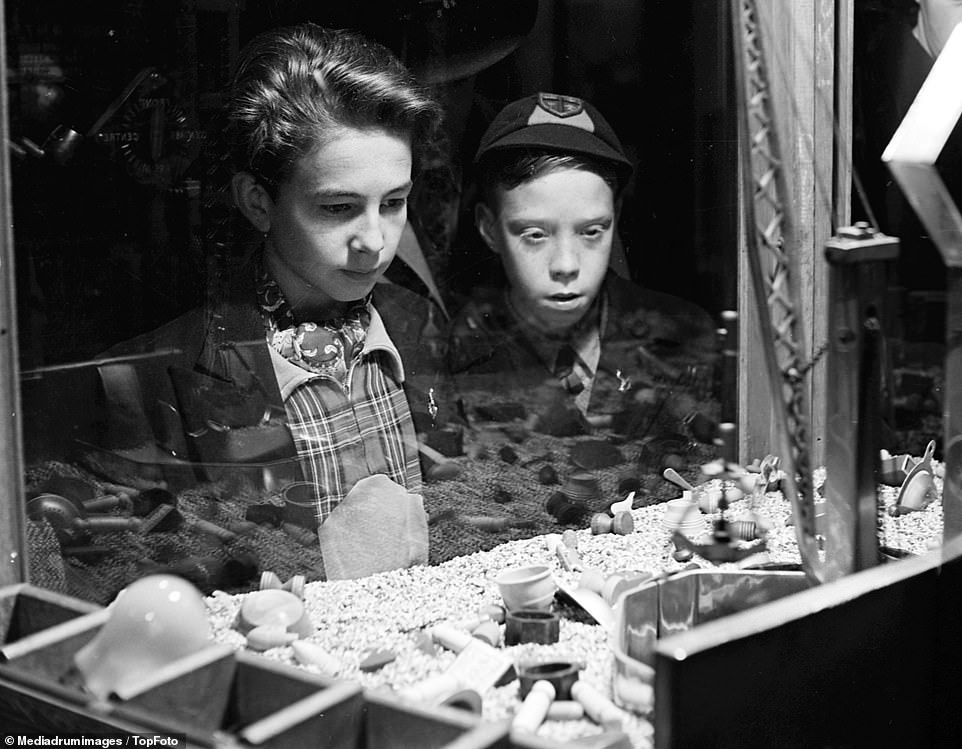 Two schoolboys eye up the prizes at the Claw Crane game - a type of entertainment still found in arcades today, although stuffed toys and boxes of cash are more commonly on offer nowadays to those with a steady hand and a bit of luck 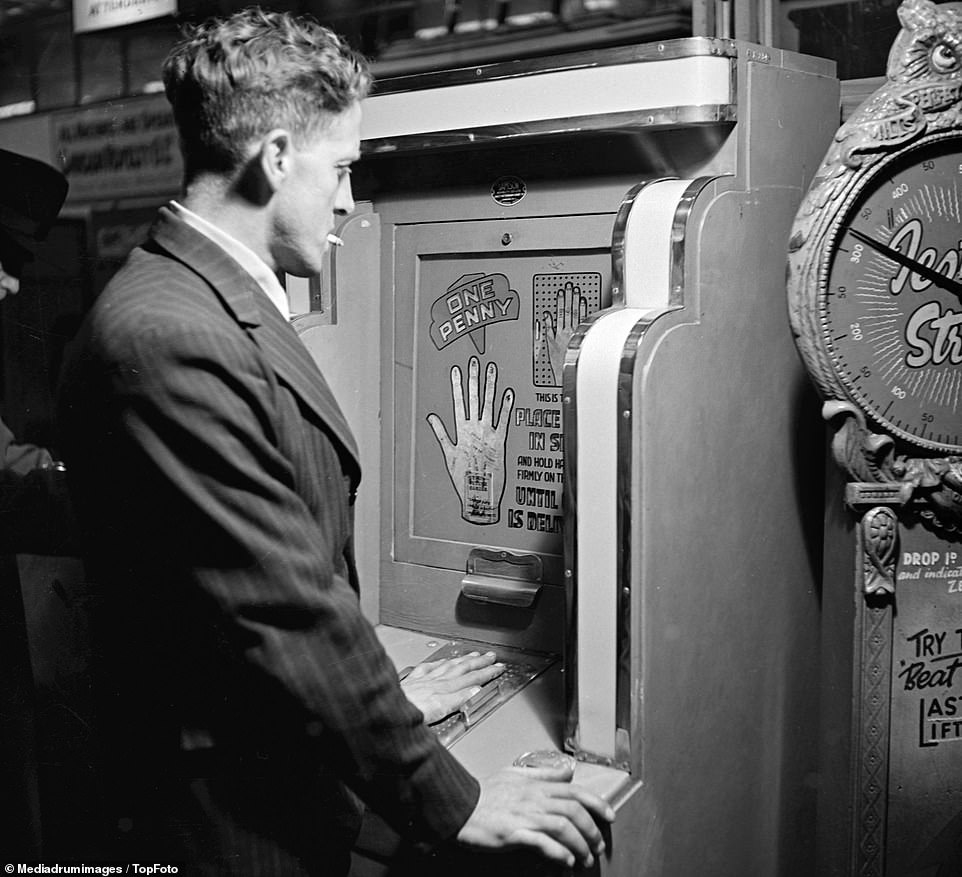 A man holds a cigarette in his mouth as he has his palm read by a machine. The amusements, also known as penny arcades, were most often frequented by men and teenagers, although families could also enjoy a night out there together 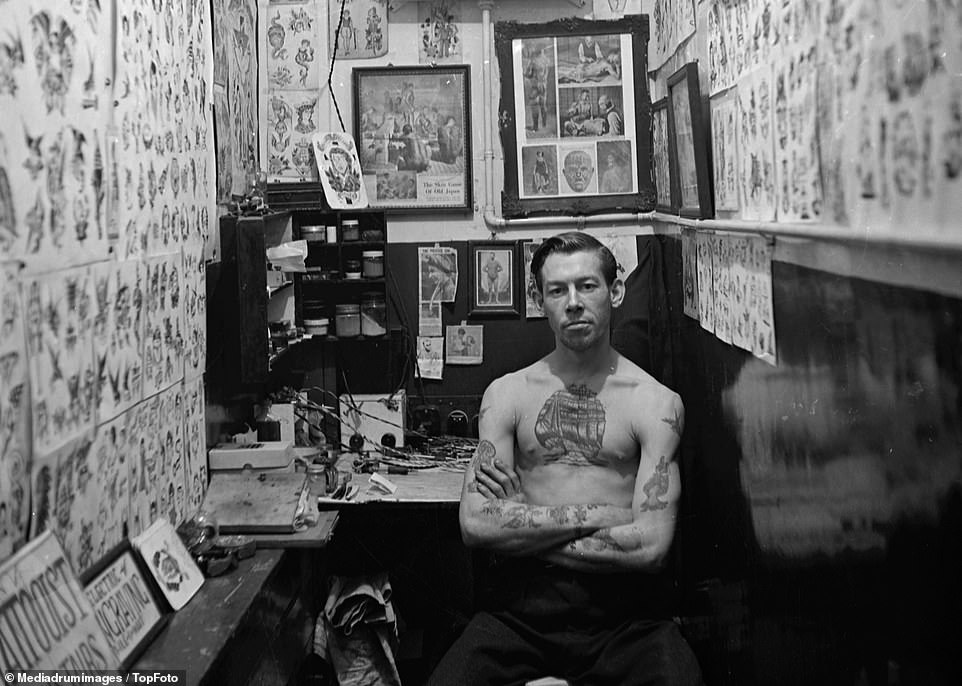 A tattooist waits in his tattoo parlour for customers, as he poses for a portrait showing off his inkings. Tattoos first became popular in Britain in Victorian times when the Queen's grandson and future King George V got one in Japan aged 16 in 1881 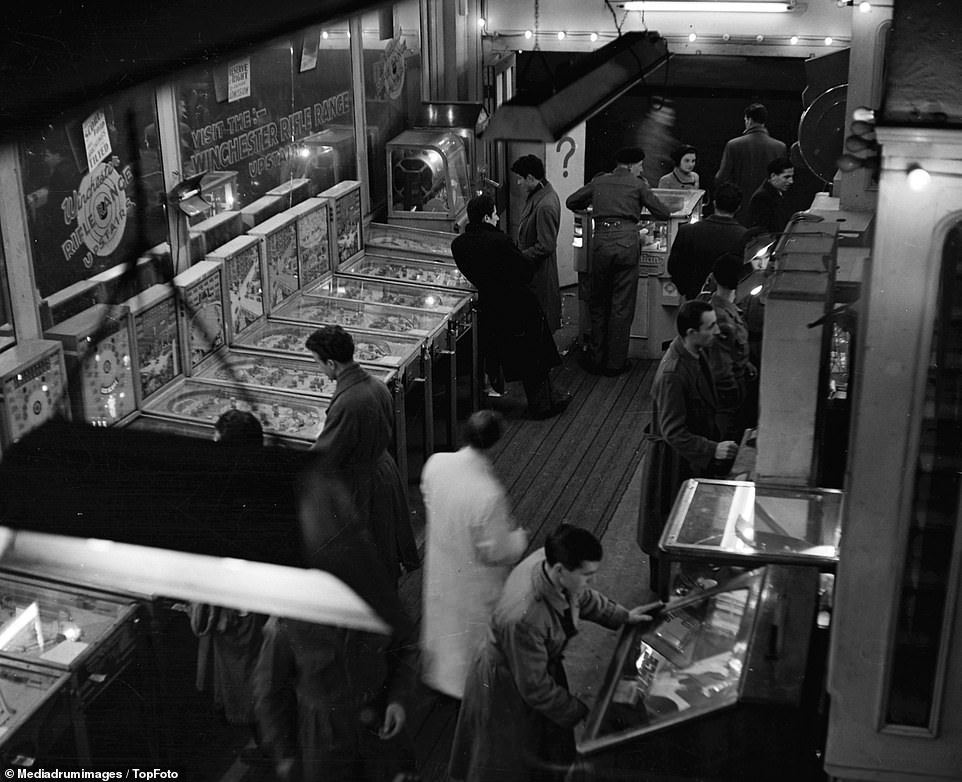 An aerial view of the amusement arcade and the pinball machines, in one of the remarkable photographs showing how the British public used to enjoy a variety of coin-operated games including palm reading, pinball and even peep shows 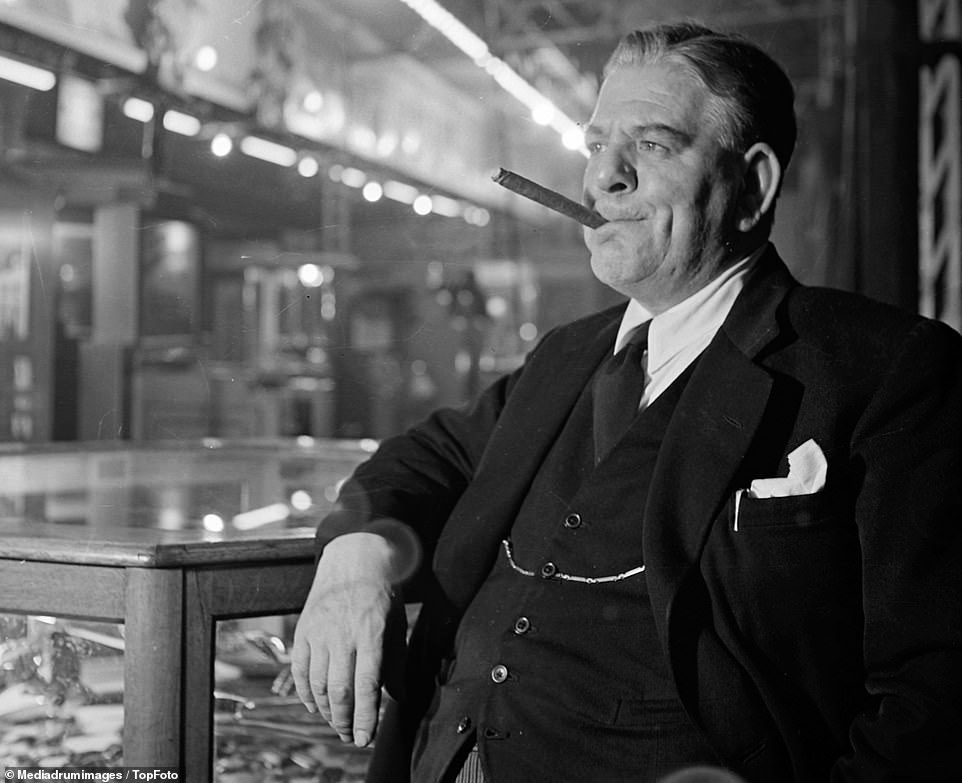 A man thought to be the manager of an arcade is pictured in 1951. Many grand theatres in seaside towns including Brighton and Blackpool became arcades in the 1960s before they really took off in 1970s with the launch of video games 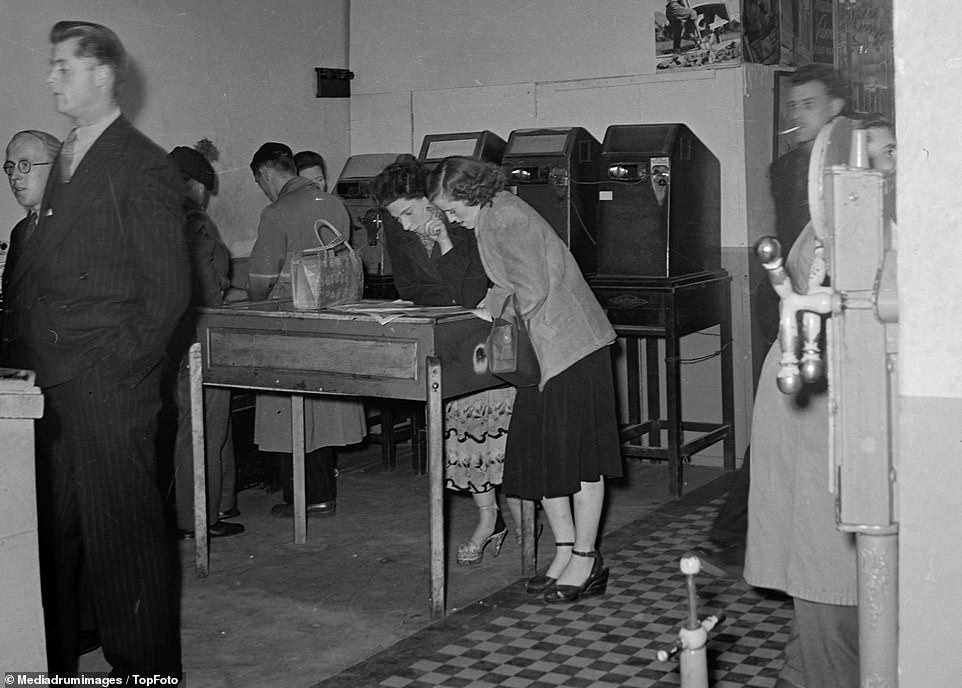 Two fashionable young women study a newspaper on a table in the amusement arcade as others play games. Coin-operated games were first introduced in the 1930s but it took until the 1972 release of Pong for arcade games to become fully electronic 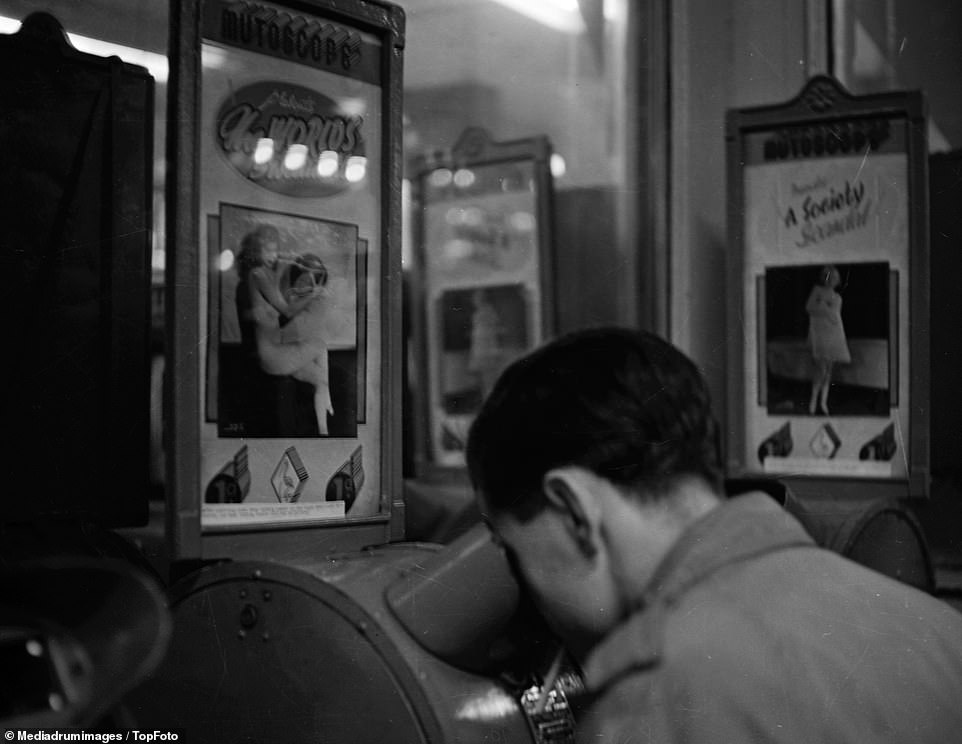 A young man enjoys the saucy peep show in the coin operated machine. This machine was built by Mutoscope, an American early motion picture device patented in the 1890s which soon dominated the coin-operated peep show market 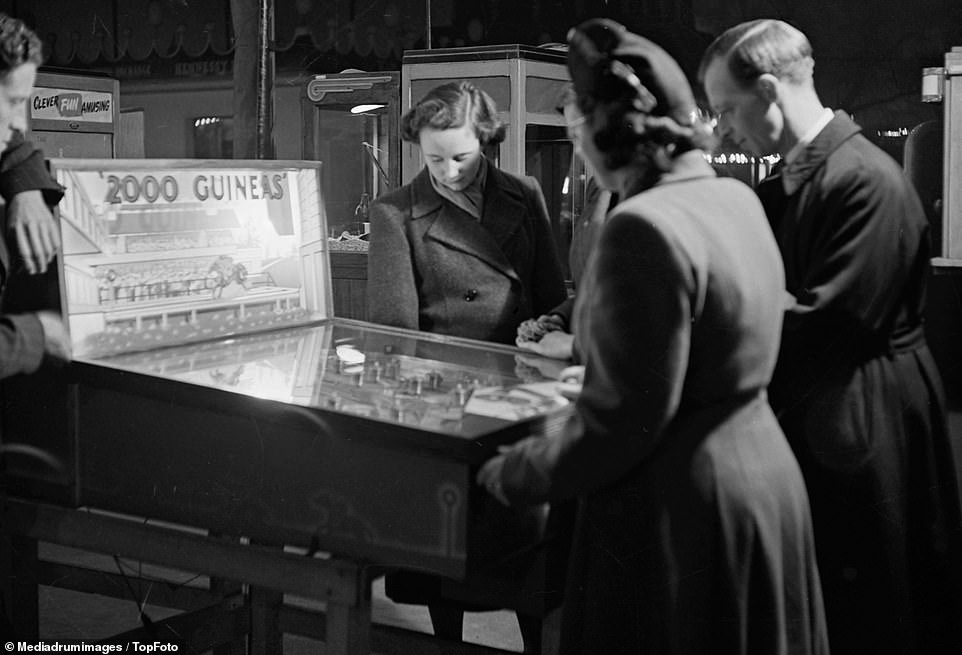 A man and woman play on a horse racing-themed pinball machine called '2,000 Guineas' as two others watch the ball moving around. The machine is named after the famous mile-long race at Newmarket which has been run for more than two centuries 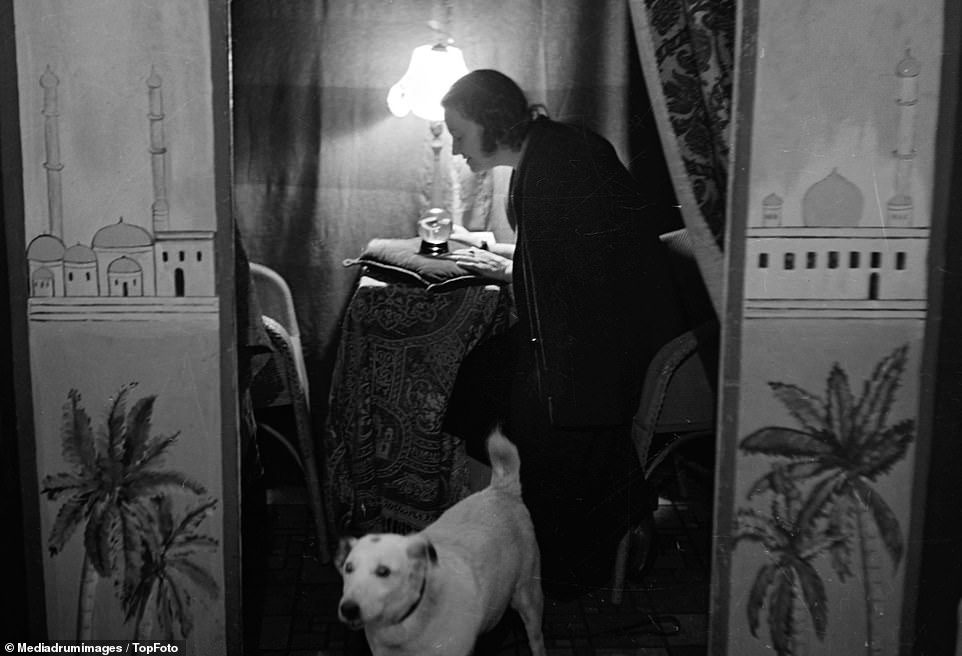 Looking into her crystal ball, a fortune teller sees into the future amid her mystical-looking surroundings while a dog walks around. A popular sight at funfairs, the practice of fortune telling actually has origins going back to 4000 BC in Egypt 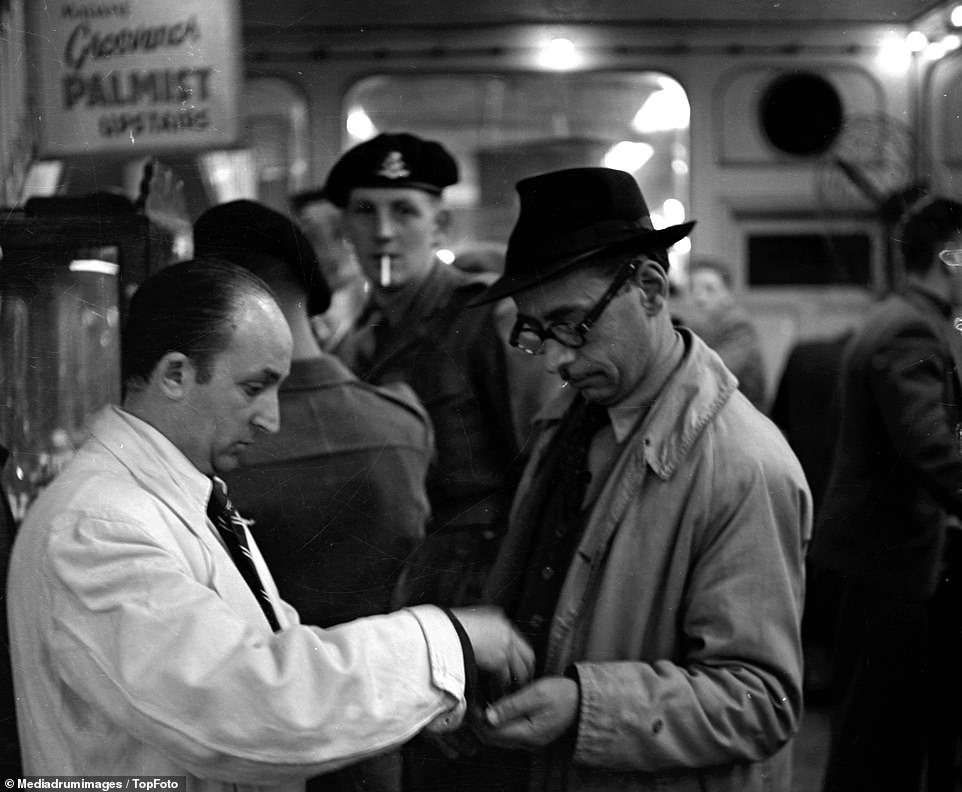 A man is giving his change as a young soldier watches on at an arcade. The entertainment venues had become a staple of the British seaside holiday by the 1930s, although these archive photos show that they were also popular in London 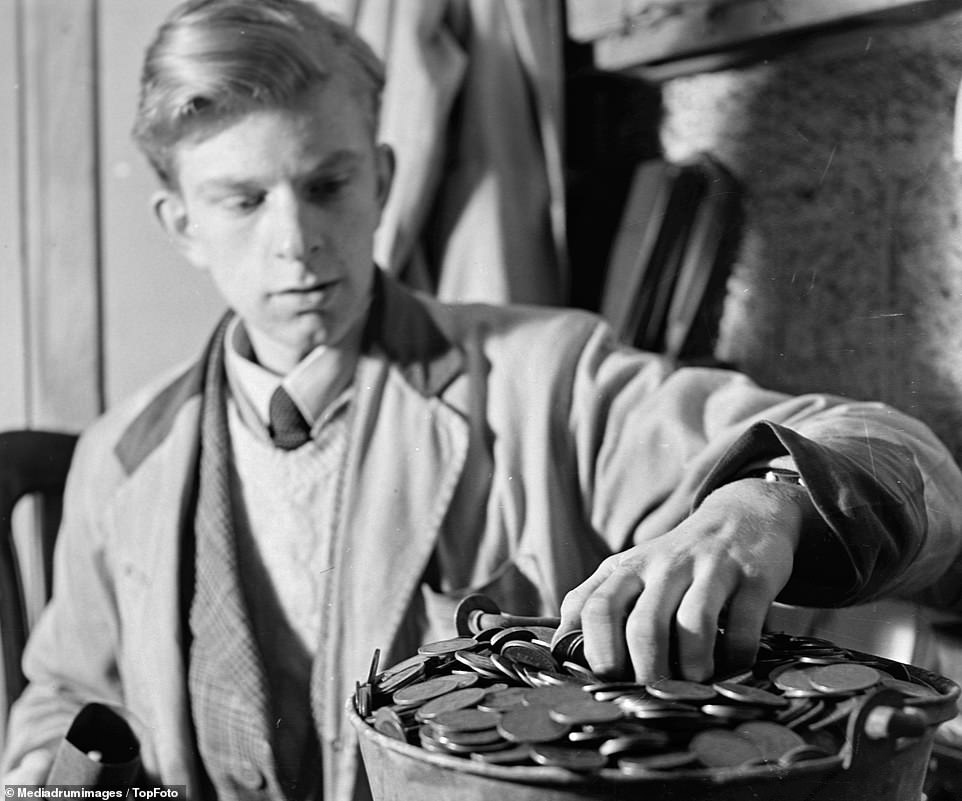 A man sorts through a bucket full of coins from the slot machines at his arcade. Popularity of the venues has suffered in recent years thanks to the rise of people owning video game consoles at home - reducing the need to go out to experience them 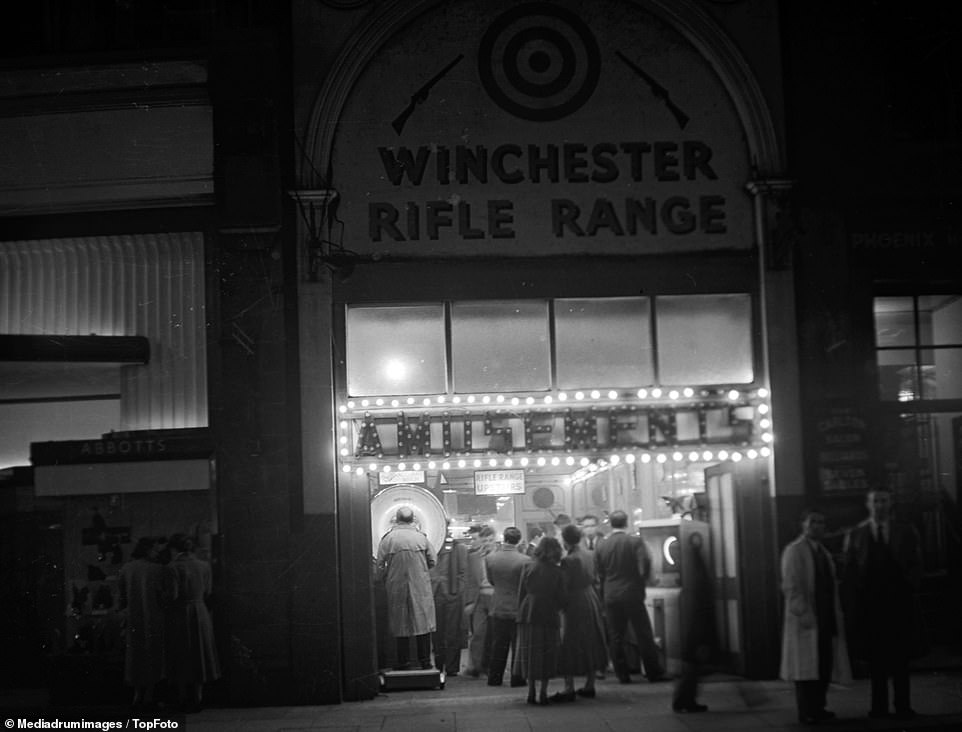 Queues of people outside the amusement arcade, which features a Winchester Rifle Range - a common sight as interest in cowboys spread across Britain. The ranges were so called because people could fire Winchester repeater rifles there

I'm surprised none of you Daily Mail readers posted this...
Some great images I haven't seen before. They come from the TopFoto Archive. With suitable search words you can find more, but have to pay for full size without the copyright watermarks.
Top

Super images, thanks for posting.
Top

Some very interesting photos including 7 from that same arcade shown above (dated Dec 1951).
This one (from a different arcade) caught my eye as interesting:

being interested in vending machines I also noticed a rare gas mantle vendor.

Yes, they actually used the original 1890 winchester design rifle which was a .22 and easy to buy cheap secondhand, Remington and Western Ammo both made a special bullet for fairground range use called "Kant-splash" which disintegrated on impact for safety (??)
Top

Fabulous pictures, thanks! Makes you yearn for the old days, minus all the cigarette smoking.

No gambling machines, back then.
Top

No allwins either, at least not in view.
The two lads intent on a prize from the crane is a classic. Just how I remember it - all peanuts and nothing worth winning.
The fat controller's perfect with his watch chain, cigar and a look that would deter anyone from complaining, "it stole my penny".
Top

Many thanks for posting these fabulous pictures.

Does anybody know what the 'Come Again' machine in the first photo might be? Maybe a vendor of some sort as there appears to be the word 'empty' on one side.
Top

I've seen it before but know little about it. it's called "Humpty Dumpty Sat on the Wall", or something like that.

That Berkel scale is truly massive, bigger than the WSG "Classic". The National Service squaddies surrounding the prize vendor is also a great photo of the era.

There is a machine to their right as you look at them with a steering wheel (the drum can be seen clearer in another photo). I remember these as a kid, a large green drum rotated towards you and you had to steer a bar using the steering wheel and un lock doors on the drum. Anyone know what these were called and who made them?
Top

Fantastic pictures. Nice to see a Sidney Knows in star position right at the front, quite a high overall percentage of fortune related machines which shows how popular they were, and still are.

The absence of allwins, bandits etc may have been down to something like a condition of the lease. Old leases often had moral and no gambling clauses within them. We once operated an arcade with a restrictive lease, we could only operate amusement only machines and skill machines (and not amusement with prize machines).
It took us many years to overturn the condition before we could operate them.
Top
Post Reply
22 posts

Users browsing this forum: No registered users and 9 guests