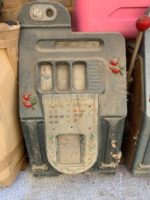 I thought that might get peoples interest, Yes three bandits for free ,of course there is no such thing as a free lunch,but it could be a good.
Ian Shefras (of the famous slot family) has asked me to see if anyone can help him.
He has 5 slot machines (photos below) he will GIVE three of them (2 Mills and the Aristo) to anyone who will restore the other two for him, simple as that, anyone interested contact me and Ill put them in touch with Ian so a deal can be worked out. Could be a good deal, two pre war mills bandits most likely in the original config and a four reeler that MIGHT be savable, if I had the time (and room) id be interested. I have added SOME photos but not of all the machines,but all 4 mills machines are the same in condition and style

This Ad has been viewed 68 times.